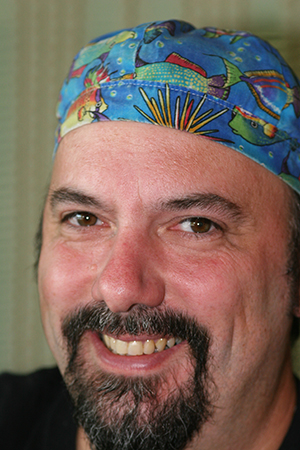 My name is Eric Bodrock. I have been interested in aquariums since age 10, when my sister showed up with a bag of goldfish from her workplace and handed themto me. When I began the 6th grade, I was seated in front of a 10-gallon tank during my morning homeroom. At the end of the year I was given some of the fish from the tank. This included some "salt and pepper" moons, which of course had a bunch of babies. That led to the purchase of a "baby" tank, along with five free fish that came as a sales promotion with the purchase. My mom did well by picking out five Corydoras (paleatus). The Corydoras spawned about a year later and that is when things snowballed. By 9th grade I landed a job in a local pet shop, by 12th grade I had worked in three different shops, bought out one that had closed and was maintaining 60 aquariums. I ran the fish department of another shop right out of high school and left there to open my own shop, at age 20, with a couple of partners. I sold out to them after three years and opened my own "aquarium specialty" shop. I sold that business after eight years. I worked as a sales rep for Jim and Nancy White, owners of White's Fish Farm, a large pet distributor in Ohio, until they shut down in 1997. I have been active in the Greater Pittsburgh Aquarium Society, Inc. for many, many years and have reached the "Master Breeder" level of their Breeder Award Program, spawning well over 150 species. I have judged many fish shows throughout Ohio, New York and Pennsylvania and have attended hundreds of related events. My specialties are Corydoras catfish, which I have spawned over 30 species, and Killifish.