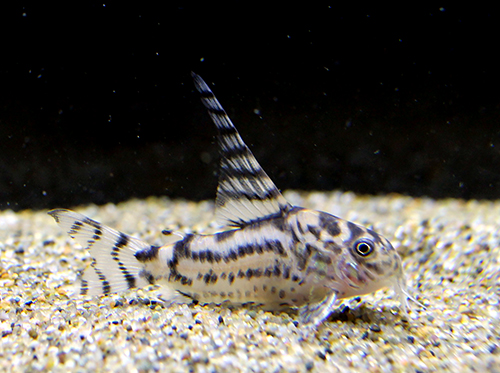 Sacrificed for its beauty: a journey in search of the legendary 'Zebra Corydoras'

The Callichthyidae armored catfishes can be promptly recognized among other Siluriformes by having two longitudinal series of dermal plates on flanks (Reis, 1998, 2003). The family currently comprises more than 200 species grouped in eight genera, including Corydoras Lacépède, 1803, with more than 170 valid species, which makes it the most species-rich genus of the family and also of Siluriformes, (Reis, 2003; Lima & Sazima, 2017). Since the 1970?s, comprehensive studies attempting to understand the taxonomy and phylogenetic relationships of the species of Corydoras have been made (e.g. Nijssen, 1970; Nijssen & Isbrücker, 1980, 1983, 1986; Britto, 2003; Alexandrou et al., 2011), however, the knowledge of the taxonomy and interrelationships among Corydoras species is still poorly known (Britto et al., 2007).

As mentioned by Tencatt & Evers (2016), the Corydoradinae are very popular in the aquarium hobby, being kept and reproduced for many decades by hobbyists around the world. Some species in the ornamental fish trade are recognized for the difficulty in determining the taxonomic status among those already described. To avoid the creation of nomina nuda by using trade names, Evers (1993) implemented a code system for all these putative new species, giving each of them a ?C-number? (?C? stands for ?Corydoradinae?) published in the Die Aquarien- und Terrarienzeitschrift (DATZ) German aquarist magazine. After the C-number coding had been ceased by DATZ magazine after C159, the system was taken on by the ?Corydoras World? website (www.corydorasworld.com) using CW-number coding (?CW? stands for ?Corydoras World?), which restarted the count to include the growing new morphotypes known in the aquarium trade.

Recently, an intriguing new species, coded as CW111, generated great interest and controversy in social networks, being often compared in color pattern with the well-known Hypancistrus zebra from the rio Xingu, which helped it receive the nickname of Corydoras sp. ?Zebrina?. Initially, the origin (locality data) of the species was kept in secret, a clear attempt to maintain hegemony over the stock of this species, sustaining the enormous prices charged for each individual, that reached more than £500,00 in Asia. In 2007, during the famous Pipe Expedition, a project performed by Brazilian and North American ichthyologists in the Serra do Cachimbo region, five species of Corydoras were recorded. Due to its distinct beauty, one of these species, recorded from the rio Jamanxim basin, was provisionally called Corydoras sp. bonita (= beautiful Corydoras sp. in Portuguese). Comparing the specimens captured in the rio Jamanxim basin with CW111 specimens it was possible to conclude that both clearly belong to the same species. Although an additional collecting trip performed by the Museu de Zoologia da Universidade de São Paulo (MZUSP) staff in the same region has resulted in the capture of more specimens of CW111, only nine specimens, mostly juveniles, are currently deposited in museums. Since all known CW111 material is from the rio Jamanxim, a tributary to the rio Tapajós, Brazil, it is reasonable to consider that the species does not occur in another country. Considering this, its export must follow the Brazilian law, which does not include CW111 in the list of permitted species for exportation. Therefore, all available specimens in the aquarium trade were obtained illegally from animal trafficking.

In order to provide a fine description of this peculiar new species, the main objective of this project is to perform a collecting trip focusing on the capture of more specimens of CW111, in specific the adult ones. Its formal description is just the first step to promote the preservation of this new species. With more ecological and biological data, it will be possible to better understand CW111 and its habitat, and verify, or at least infer, its conservation status. Additionally, a collecting trip to such a poorly known region, regarding its fish fauna, will possibly result in the capture of several other interesting and potentially new species.

The collecting site of CW111 is located in an area of the Amazon that is extremely difficult to access, considerably raising the costs of a satisfactory collecting trip. Considering that the funding for Brazilian science is currently suffering consecutive cuts (see http://www.bbc.com/portuguese/brasil-40504128; https://brasil.elpais.com/brasil/2017/11/27/ciencia/1511806311_065202.html), which strongly affected ?basic science?, such as the recognition and cataloguing of the fauna and flora, the money from the Research Assistance Program by Corydoras World can make it possible to travel to the Serra do Cachimbo once again, lair of the unique ?zebra Corydoras?.

Britto, M.R. (2003) Phylogeny of the subfamily Corydoradinae Hoedeman, 1952 (Siluriformes: Callichthyidae), with a definition of its genera. Proceedings of the Academy of Natural Sciences of Philadelphia, 153, 119?154.